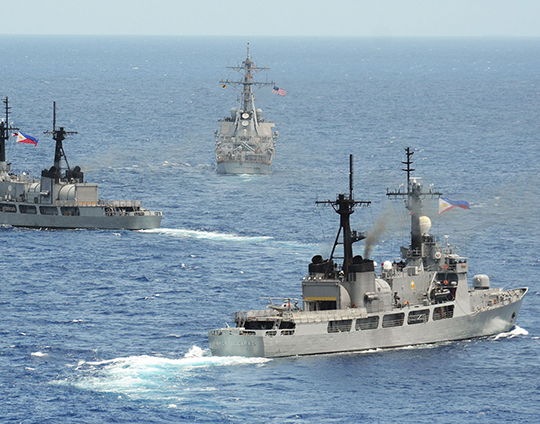 Seapower 21 was promulgated by the Chief of Naval Operations in 2002. It provides a framework to align, organize and integrate the U.S. Navy to meet the wide variety of challenges that lie ahead. To become more efficient and effective, the CNO called upon the entire Navy.

The Virtual SYSCOM Commanders formalized an agreement in 2004 to expand the ordering community of Seaport. This was done through a rolling admission to include all Virtual SYSCOM activities and to leverage the success of SeaPort in achieving the aforementioned objectives. Additionally, other Navy activities, including the Military Sealift Command, Strategic Systems Programs, and the United States Marine Corps have chosen to use SeaPort.

Cydecor assembled a team of highly qualified members, submitted a responsive proposal, and was awarded a prime contract for SeaPort.

We provide our customers with quality products and services. We adopted Continuous Quality Improvement (CQI) concepts as part of our corporate attitude towards serving customers, and improving the value of our products and services. All customer personnel are encouraged to assess our performance to ensure expectations have been attained.

To assist our customers in achieving related efficiencies and contracting goals, our quality assurance processes are structured in a manner that facilitates transition to performance based contracting.

All of Cydecor’s team members that support SeaPort TOs are responsible for quality assurance. This implies ensuring the quality of their products and services, identifying metrics, collecting measurement data, implementing corrective actions, monitoring the effectiveness of corrective actions on the quality of their products and/or services, and reporting applicable lessons learned resulting from CQI activities. Cydecor’s Task Managers are responsible for quality at the TO level, while Cydecor’s SeaPort Contract Manager has the overall responsibility for quality across all Task Orders.

The specific products/services to be assessed and measured will be determined at the TO level with customer concurrence. Each product/service will have associated quality attributes and an Acceptable Quality Level (AQL) that represents the desired level of performance. Where appropriate, Cydecor will establish performance metrics and develop a surveillance plan designed to measure performance.

Indications of quality evolve over time based on changes to requirements, processes, products, standards, goals, technology, and other factors. Therefore, Cydecor periodically reviews and updates our quality related programs to ensure 1) the quality of our products and services and 2) that those are reflective of requirements.